Peter Quill (Chris Pratt) is an intergalactic outlaw and treasure hunter who calls himself Star-Lord. When he nabs a mysterious artifact in the form of a powerful orb, he discovers that it is being sought after by a powerful individual known as Ronan The Accuser (Lee Pace), who will stop at nothing to get it. The orb, as well as Peter’s outlaw status, puts him in contact with other misfits like Rocket (Bradley Cooper), Groot (Vin Diesel), Gamora (Zoe Saldana), and Drax the Destroyer (Dave Bautista) – all of whom must band together to survive Ronan’s crusade.

Guardians of the Galaxy was always a fringe title. It never really registered with me. I was pretty familiar with most of the characters, especially Rocket, Gamora, and Groot – but Spider-Man was usually the title I gravitated toward with mainstream comics. Maybe some Avengers or X-Men stuff. But not Guardians of the Galaxy. And if they are lesser-known to me and I’ve been reading comics since I was a wee lad, I can only imagine the reactions of some folks to these characters who are new to comics or who have no idea about the franchise. A musclebound killer? A green-skinned femme fatale? A walking tree in desperate need of a dictionary? An angry, anthropomorphic raccoon who fires guns? A sarcastic, egotistical human male flying around space like he’s a badass? Who knew it’d be so good and work so well as a film?

The key to the whole film’s success is the fact that the above characters sure ARE cool – but also the film’s resonance with our pop culture psyches via Peter Quill’s Awesome Mix-Tape that he plays on his Sony Walkman. (He was abducted by aliens in the late 1980’s – long story, and I don’t want to give anything away – so go see the film and see for yourself). The soundtrack had people swaying and bopping their heads in their seats during the showing I went to. It also makes Peter Quill accessibly human. Music is an access point that knows no language boundaries to be enjoyed.

Aside from the interesting characters and the amazing soundtrack, the casting was well done. The only complaints that I really had about the film were actually the villains. The heroes were well-established and had screen time together so that we really felt like they bonded, but Ronan’s motivation was flat and predictable. Ditto with Nebula (Karen Gillan). I would have liked to see more established backstory and/or screen time for those characters. As it is, they are very generic “we want ALL the power” villains. That is a really small gripe, though, because the main focus was really supposed to be on the Guardians themselves –  and Gunn (as well as the cast) not only excelled at that but as of right now, this is my favorite Marvel film to date.

Go see it, and make sure to stay for the end credits for a surprise cameo!

Movie Trailer For Guardians Of The Galaxy

Reed Richards (Ioan Gruffudd), brilliant scientist, has a theory that there are clouds of cosmic energy that move through space which can trigger evolution. Convinced that one of these clouds will come close enough to Earth to observe and analyze from a relatively short distance away in space, he enlists the help of his longtime friend Benjamin Grimm (Michael Chiklis) to help him convince billionaire Victor Von Doom (Julian McMahon) to let them use his private space station. He allows it, but only if the research is under his control. Doom then brings aboard his own genetics researcher Susan Storm (Jessica Alba) and her younger brother Johnny Storm (Chris Evans) who complete the team. When something goes unaccording to plan, everyone aboard the space station aside from Doom is hit directly with the cosmic energy cloud, granting them amazing abilities and altering their DNA structures. Becoming media darlings after a rescue, the four researchers must struggle with their newfound abilities and fame as the Fantastic Four.

Being a Marvel movie, I was pretty excited for this film when it came out. Up until then, we’d had a pretty decent Spider-Man movie as well as Blade and X-Men. I thought the Thing looked a little cheesy, but figured it’d be okay up on the big screen because he was being played by Michael Chiklis. Chris Evans seemed perfect for the character of Johnny Storm/The Human Torch. Jessica Alba didn’t initially sell me on being Susan Storm, but she’s hot so I figured I’d give it a chance. The guy who played Reed looked like he’d do well enough.

I was right about most of those initial thoughts. Michael Chiklis DID play Ben Grimm exactly how I’d want him to be played, but regardless of how well he acted…I have to say, that rubber suit was kind of atrocious. Not saying I wouldn’t love to wear it as a cosplay or something like that. It’s made really well but for the big screen in a movie that SHOULDN’T be full of camp, it added a sort of cheese factor that carried through to the rest of the film. Chris Evans was perfect for the role of Johnny Storm. Jessica Alba was hot, but was not Susan Storm (and there was some controversy because of her being cast as Susan Storm and the fact that she’s not mixed-race in the comic books). Ioan Gruffudd (crazy name!) was just okay as Reed Richards.

I loved Julian McMahon’s acting and presence in the show Nip/Tuck, but as Victor Von Doom…not so much. I never really thought of Doom as a whiny socialite, like Tony Stark from Iron Man without the class. It didn’t work.

On top of that, we had a story that while initially starting out not that bad meandered all over the place and didn’t really provide much in the way of action for an action film. The end battle with Doom was extremely anti-climactic and I didn’t feel like I’d used my time well by watching the film, aside from my unhealthy obsession with Jessica Alba.

I mean, how can you go wrong with this?

Give it a watch if you haven’t….see how it is compared to the upcoming 2015 reboot by Seth Grahame-Smith and Josh Trank. It’s still Marvel, after all. (Just don’t watch the second one with Silver Surfer…Jesus, that was bad). 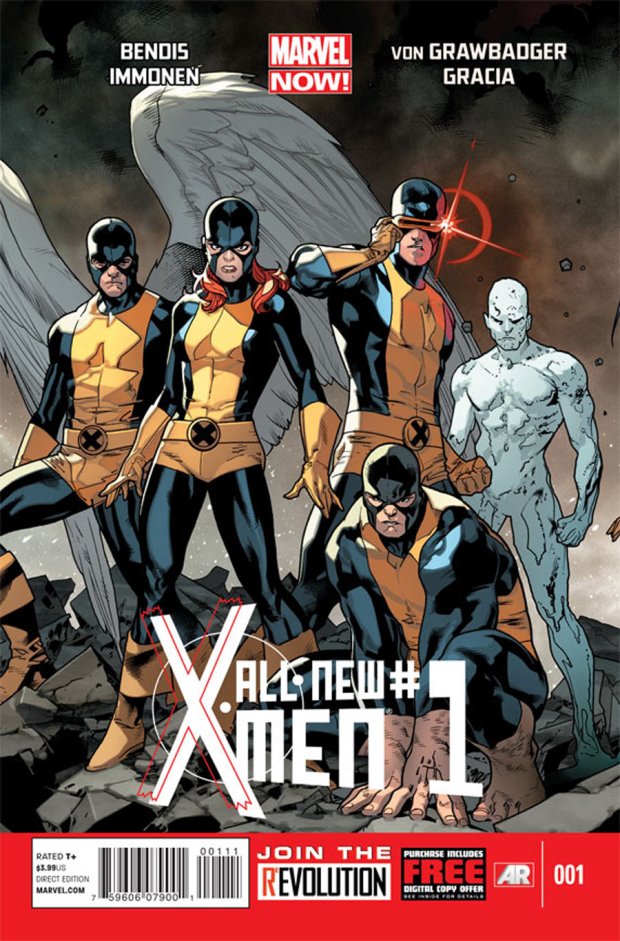 Cyclops, one of the most prominent members of the X-Men and one of its original members, is now a fugitive wanted by almost every costumed hero and government entity in existence after the Phoenix Force corrupted him and he killed his former mentor, Professor Charles Xavier. Dying from another mutant transformation, and out of ideas, Hank McCoy (aka Beast) goes back in time to bring back the younger version of Cyclops to hopefully talk some sense into the present-day version. Maybe together they can save mutantkind.

I hadn’t really heard much about this series as I’d been out of the comic loop for a few months, but I noticed the older costumes on the cover. I am hoping to cosplay as the 60’s version of Cyclops, so I figured I’d pick up the first three issues to not only use for reference, but also to see what it was all about.

I was pleasantly surprised.

Issue #1 opens with Beast writhing on the ground, dying from a new manifestation of his mutation. He prays that he is allowed to do something good for mutantkind before he dies, and then we move on to Cyclops and his new teammates, Magneto and Emma Frost, liberating and recruiting new mutants who are popping up everywhere.

This first issue started out just a LITTLE slower than I would have liked, but the action picks up toward the end enough to have kept me hooked until the next issue. Bendis knows what he’s doing, I think we all know that. There were a couple of typos I noticed here and there (way to go, editor), but otherwise it was a good read.

The art by Stuart Immonen (Pencils), Wade Von Grawbadger (Inks) and Marte Gracia (Colorist) was amazing. Sometimes I noticed that, for whatever reason, it looked like Immonen phoned it in on the faces in some of the smaller panels but he really does action very well. The inks give his work some solid depth and the coloring, of course, makes it pop.

I think this series is going to do pretty well. 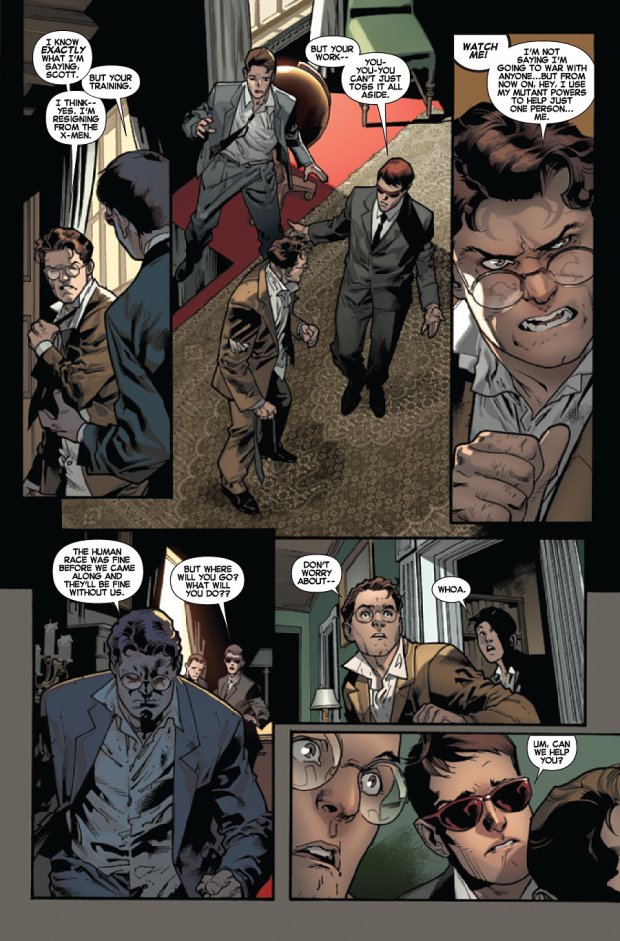