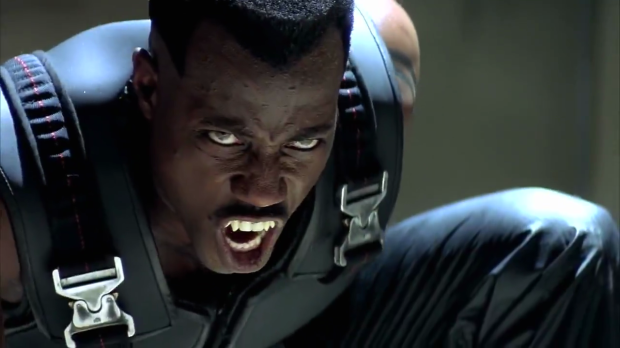 Blade (Wesley Snipes) is a Vampire/Human hybrid that has all of the vampires’ strengths and none of their weaknesses, and he has vowed to destroy every last one of the bloodsuckers that he comes across with his crazy arsenal of weapons and martial arts training. A vampire named Deacon Frost (Stephen Dorff) has other plans for humanity and is tired of vampires having to stay below the surface of civilization, so Blade must put a stop to his machinations with the help of his mentor, Whistler (Kris Kristofferson) or else mankind will be enslaved, or wiped out, by Frost and his vampire army.

People often forget about this Marvel movie that came out before the X-Men brought Marvel flicks into the spotlight. It, unfortunately, was left in the dust despite it being a halfway-decent comic-to-movie translation from that era. Based on the comic book title published by Marvel of the same name, Blade does a great job capturing the essence of the original character.

The special effects in this film look a little dated, but other than that, the action dominates in this short-of-story movie that has Wesley Snipes doing what he does best: kicking ass and talking in a deep voice.

The film is flashy and fun, but forgettable. It seems to have regained some popularity as of late with an animated Blade show, so who knows…maybe this will also get a reboot like the original Spider-Man  (My review for that movie linked here) movie did? I think with today’s special effects capabilities and Marvel’s rising ability to make big-budget films, this one could be given a great overhaul.

As it is, most of the actors do their jobs well. Kris Kristofferson is a real badass sidekick for Blade and Stephen Dorff is a really great villain. As said above, Wesley Snipes killed it in this film.