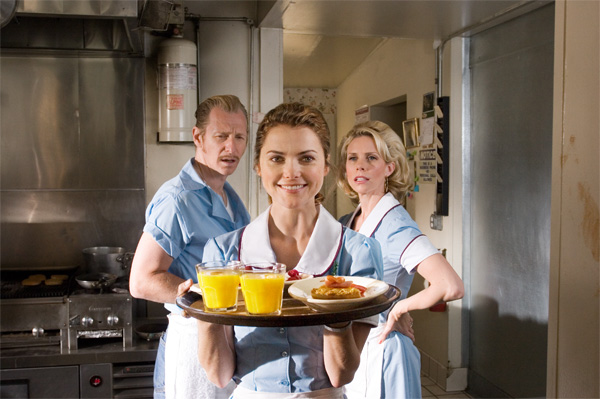 Jenna (Keri Russell), a server who is trapped in an abusive relationship with her husband Earl (Jeremy Sisto), has a talent for creating amazing pies -which she often uses to mentally escape from her life. A new doctor comes to town (Nathan Fillion) and she finds out from him that she’s pregnant, spurring a series of events that rock her world and force her into action.

Waitress kind of surprised me. I wasn’t sure what to expect with this movie before seeing it. I’d watched the trailer and  liked the look of the cinematography and the narrative voice of Jenna’s character. I love Jeremy Sisto as an actor, and also Nathan Fillion, so it was a natural for me to check out.

The acting was amazing in this movie. I hadn’t seen much of Keri Russel but she played her part very well. Jeremy Sisto was an amazing douche bag husband and Nathan Fillion was, of course, charming as the new doc. This was a very character-driven piece, the plot being secondary. Adrienne Shelly weaved everything together masterfully, though, and it all came together. I enjoyed seeing all the different sorts of pies she made and I rooted for her success. (Plus, we got to see Matlock in a diner)

About the only thing that kept me from giving it five stars was the pacing toward the end. By the time it was starting to wrap up, I had already figured out almost everything that was going to happen and basically had to stick around to see if I was right, at the end. Still, Adrienne Shelly definitely showcased her directing chops with this one. It’s too bad that she was murdered and now will not be able to create any more films. 😦

PS – I wonder if they created a pie recipe book as a movie tie-in. I’ll have to Google that…