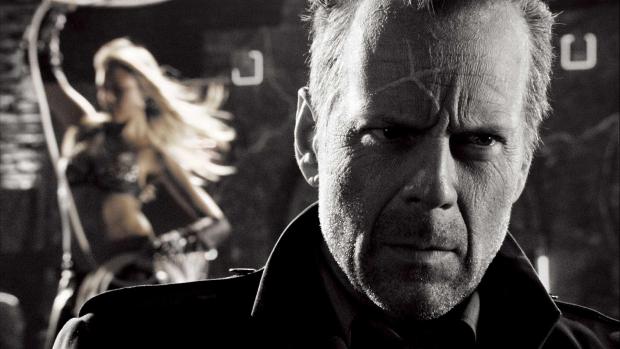 Basin City, AKA “Sin” City, is a vile place of corruption, sex, and murder. Marv (Mickey Rourke), Dwight (Clive Owen) and Hartigan (Bruce Willis) are just three hard-boiled characters with intersecting paths who are rays of light standing against the dark. Part comic book, part noir and all thrill – this adaptation of Frank Miller’s graphic novel is very faithful to the source material.

Since the sequel to this film just came out, Sin City: A Dame To Kill For, I felt like I needed to bone up on this film franchise once more before seeing the new one.

The narrative layout of the film is interesting. Vignettes showing each “main” character and their interactions with the film’s secondary characters including villains and allies, makes the world of Sin City seem large and real. Most of the shots in the film are lifted right from Frank Miller’s pages of artwork and the casting was all done very wonderfully, particularly with Mickey Rourke as Marv. (Seriously, look at the guy). You also get to see Brittany Murphy in one of her last good roles before she died….and the same with Michael Clarke Duncan as Manute.

The special effects are all very stylized, very slick, but a couple of times they look wonky. Most of that was due to the artwork not translating well to film, because of how stylized Frank Miller’s artwork is. The black and white look of the film kept everything very visually appealing. The dialogue was great noir fare, if you’re into noir – but if you’re not into noir at all it may seem hokey and even terrible in spots.

If Robert Rodriguez and/or Quentin Tarantino were to direct a comic book film, Sin City was the perfect choice for them and you can tell that they had fun directing it, which means if you’re like me – you’ll have fun watching it.

If you’re looking for strong women characters, then this typical noir setting probably isn’t for you. The women of Old Town run their prostitution rings with cold efficiency, keeping the mob and corrupt police officers on the level, but that’s about it. Most of the other women in the film gasp and toss their hands against their foreheads while the men do the real work.

The one drawback to the film is that the three main characters – Marv, Dwight and Hartigan – are all fairly similar, making the story arcs seem pretty repetitive. Clive Owen was underwhelming as Dwight. Mickey Rourke nailed Marv (as I said before) and Bruce Willis was great as Hartigan. Rosario Dawson was kinetic as Gail, and Jessica Alba was decent as Nancy Callahan. Also, Elijah Wood was surprisingly creepy in his role as Kevin and Benicio Del Toro as Jackie Boy. They weren’t in the film for very long but they definitely added very interesting bits to the story.