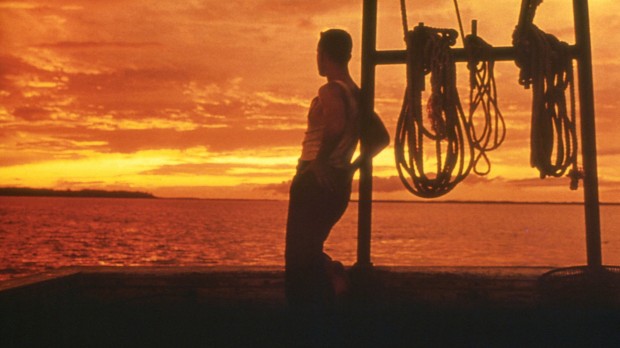 Forrest Gump (Tom Hanks) lives a charmed life, despite being born with a lower I.Q. than most – as well as a physical deformity of the spine which forces him to wear corrective leg braces. Gump’s mother (Sally Field) pushes and encourages him enough that he eventually sets out on his own and ends up witnessing lots of events in recent history that have shaped the world. On his journey of self, he chases love – in the form of Jenny Curran (Robin Wright), his childhood friend and crush – and also experiences war, happiness, loss and the gamut of the human experience, proving that despite his setbacks, Gump is wiser than most of us can say we are.

I remember seeing this back around the time it first came out, and I remember being blown away. So, I figured I’d revisit it, since it’s on Netflix, and to tell you the truth – Forrest Gump holds up pretty well over time.

Forrest Gump, the character, is one of Tom Hanks’ better roles. I’m no Hanks hater by any means, but he has a particular style that doesn’t lend to camouflaging his own personality. When I see him in films, I have a hard time separating film Hanks from real-life Hanks that I’ve seen. In Forrest Gump, this isn’t a problem.

Much like Billy Bob Thornton’s role in Slingblade, this is one of those times where you wonder if they’d have been able to make a film like this nowadays. There are some questionable messages in the film that critics would pounce on in present times, but for the time it was made it was a nice reflection on the Baby Boomer generation.

The movie is based, of course, on the novel of the same name by Winston Groom from 1986, although in the book, Forrest Gump is a pretty different character. Also, there are a few different events in the book that never made it to the movie version – like when Forrest went to space (would’ve been strange to see Hanks in space in Forrest Gump as well as in Apollo 13, amirite?!)

The only thing that didn’t really hold up too well was when it showed footage of Forrest in the old newsreels and footage from things and events that Forrest was privy to witnessing as history in the film progressed. You could really notice it. Other than that, though, the cinematography was great and the pacing of the film was really well done.

If you haven’t seen this one yet – do. It’s a classic.