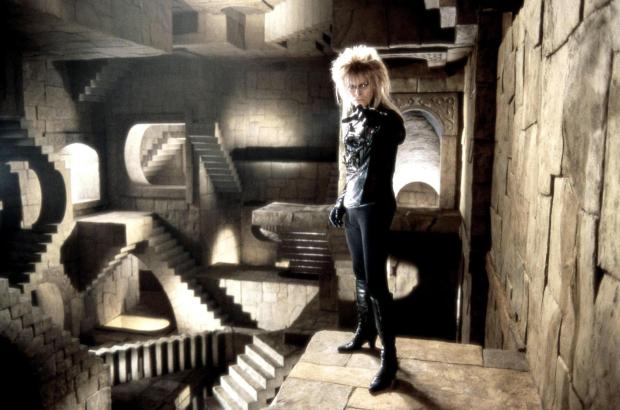 Sarah (Jennifer Connelly) is a fifteen-year old girl who lives her life in a fantasy world after her mother dies. She is unhappy with her current stepmother (like in any good fairytale) and resents being left home to watch her baby brother Toby while her father wines and dines the would-be-replacement mother. In a fit of rage, she wishes for the Goblin King, Jareth (David Bowie) to take him away. When he does, she realizes the mistake she’s made and must traverse Jareth’s labyrinth and make her way to his castle in only thirteen hours or Toby will be gone forever.

When this movie first came out, I was five years old. Back then, Jim Henson was a god (and still is, I guess), at the height of his popularity. Sesame Street and The Muppets were king…along with Fraggle Rock and all those other Jim Henson vehicles.

This was a movie we watched every year, and I still do. Jennifer Connelly was as beautiful and talented as ever back then and David Bowie’s role in this movie is untouchable, even though at one point they were considering having Michael Jackson as Jareth. (That would be so weird!)

Some of the special effects, by today’s CGI standards, are outdated but still hold a certain charm not available to CGI characters. The sets are beautiful and Jim Henson’s creations really shine and come to life.

The characters are all amazing and even though the story is simple and sort of familiar, drawing on many fairy tale and fantasy tropes, everything else combined makes it stand out from a lot of other films and media with the same types of themes.

The music is where it’s really at, though. The mood. The relationship between Jareth and Sarah. It’s all very well-conceived and I think even if you didn’t grow up with the film you could still watch it today with your kids and let them enjoy it before they are indoctrinated with all the CGI effect-laden films and cartoons we have today.

This is one of my favorite films of all time. Can you tell? This is me, cosplaying as Jareth himself. 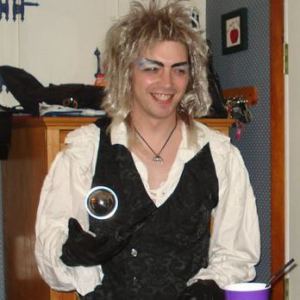