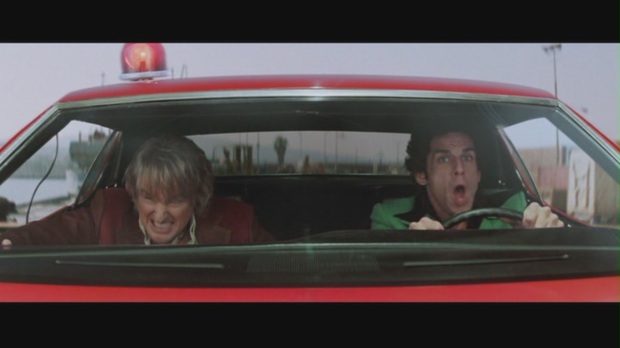 David Starsky (Ben Stiller) is, at least in his own eyes, a super cop. He narrates his own life with a sort of grim, noir commentary and takes pleasure in being an officer of the law…one of the good guys. Ken Hutchinson (Owen Wilson), often called ‘Hutch’, is the exact opposite. Ending up as partners, they must resolve their differences and work together to take down the drug czar Reese Feldman (Vince Vaughn) using intel and help from their informant, Huggy Bear (Snoop Dogg).

I was never a super-huge fan of the show, as I only ever saw reruns when I was a kid. Once I reached college age, though, I started consuming some media I missed when I was too young to appreciate it, and Starsky and Hutch was one of the shows I started getting into.

First of all, the show isn’t really anything like this movie so it’s no use really comparing the two. One is mostly serious, one is pretty much a parody of the buddy-cop genre. With that fact kept firmly in mind, I must say the film was extremely successful with what it set out to do.

Owen Wilson and Ben Stiller, love ’em or hate ’em, do what they do best in this movie – which is to butt heads for comedic effect. They are, to me, a modern day Abbot and Costello and I thoroughly enjoy every movie I’ve seen them in together.

The movie isn’t too long, running at only 95 minutes or so, and that is just enough length for a movie like this. It’s not overly ambitious, but it’s a lot of fun to watch the interactions between Starsky and Hutch or really any of the characters in this film.

There are some cool car chase sequences in the film, making use of the Ford Gran Torino that is pretty much the flagship image of this movie and of the television show.

Overall, there’s not much to complain about here unless you don’t like the kind of humor that comprises the entirety of this flick. If so, you picked the wrong movie to watch.

Oh, and the Will Ferrell cameo is HILARIOUS. (Carmen Elektra, Brande Roderick and Amy Smart didn’t hurt, either…)