Five years have gone by on the Viking island of Berk since the heroic deeds of Hiccup (Jay Baruchel) and his dragon Toothless resulted in the once-feared beasts becoming allies and pets. During a training flight to help train Toothless to maneuver better, Hiccup discovers a sect of dragon hunters who are led by the insane Drago (Djimon Hounsou), who has a desire to subjugate dragons at any cost, including all-out war.  Add that to pressures from his father Stoick (Gerard Butler) to take on the throne and the appearance of a mysterious dragon rider who steals dragons in the night and young Hiccup certainly has his hands full.

This is obviously a sequel and I loved How To Train Your Dragon so much that it was out of the question for me to miss this movie. I haven’t read the books by Cressida Cowell, but I hope to check them out soon.

The animation, as always, was fantastic. Toothless has never been cuter and there were some new things to look at in the form of new armor, new weapons and new dragons. All the old cast has returned including the aforementioned Hiccup and Stoick, and aside from the sinister Drago there are a handful of new characters as well.

The best part of this film is that it has more complexity to it than the original. In the last one, both Hiccup and Toothless were younger. Though it’s only five years that have gone by, the characters have grown. As a result, the mood of this sequel is a bit darker than the previous entry. There are darker themes and concepts and I think it provides a richer film experience. The relationships between characters have also grown, with Stoick becoming warmer toward Hiccup as well as Astrid and Hiccup being more mature in their romantic relationship – which is not overdone and sappy but you can still tell how much they care for one another. Hiccup’s mother is introduced, as well – which provides for a new dynamic between Hiccup and his parents. (Not giving anything away…it’s in the trailer.)

There were a couple of things I felt could have been improved, but they are sort of trifling. It was a bit too long for my tastes, and the pacing felt chunky at times but mostly because of all the interwoven narratives happening simultaneously. I took my young nephew and he sort of needed to get up and move around before the movie had ended, so watch out if you bring the kiddos. It may be too long for them to sit still. However, with all the cool dragons flying around on screen it’s hard for anyone to not be captivated.

Overall it was a great film and a sequel that I believe is mostly superior to the original, which is rare in many cases. It’s fun, it’s rich, it’s exciting. It’s definitely an adventure.

Movie Trailer For How To Train Your Dragon 2 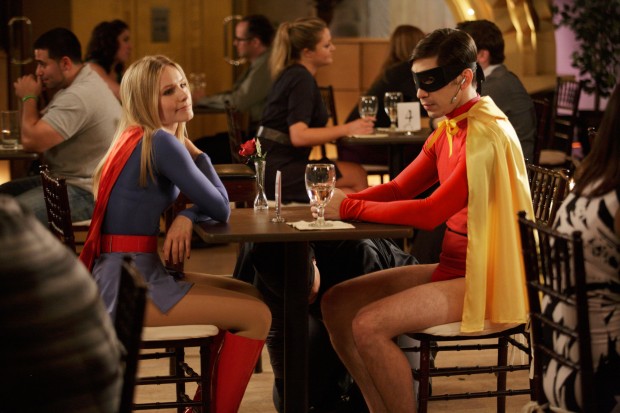 Charlie Wessler (Dennis Quaid), an insane and desperate screenwriter, manages to sneak his way into an interview with producer Griffin Schraeder (Greg Kinnear) for a movie pitch. What follows, as Griffin listens mostly at gunpoint, is a series of loosely-connected short films that Wessler thinks will be his cash cow. There is a story of a man with testicles on his neck who goes on a blind date, one about two men kidnapping a leprechaun and the consequences of doing so, one of a woman who proposes the ultimate gift (which may make you more uncomfortable than you think), and one in which Robin (Batman’s sidekick) is on the Gotham City speed-dating circuit. These are not the only skits, but in the end, they all culminate into a film that is reminiscent of others in its genre such as Kentucky Fried Movie.

There were a ton of stars in this film. Aside from Greg Kinnear and Dennis Quaid, there was also Common (the rapper, from Hell On Wheels), Hugh Jackman, Will Sasso, Richard Gere and others.

That having been said – this film should have been AMAZING. As it stands, it felt like I essentially watched an entire episode of Saturday Night Live…and not their best skits, either. Some of them admittedly made me laugh out loud but most were just potty humor. Poop and piss jokes, literally, comprised most of the skits in the film. The one that had me laughing the most was the leprechaun skit but only because of the novelty of seeing Gerard Butler as a leprechaun spouting obscenities at Johnny Knoxville and Sean William Scott that’d make a sailor blush.

It may be worth watching, if only once, on Netflix or somewhere else you can find it on the cheap. I suspect that mostly teens may find this funny, but for the rest of us it’s so-so (and not as good as Kentucky Fried Movie, either….not by a long shot).

Sam Childers (Gerard Butler) is a real-life hero formed from the virtual ashes of a hardened criminal who found God and became a construction worker. While on the job, Childers meets a priest from Africa and is inspired to visit, ending up in Sudan and Northern Uganda, where he helps to build an orphanage and ultimately moves on to becoming a liberation fighter trying to save Africa’s children from the clutches of an evil warmonger who uses them as children soldiers in his army.

Machine Gun Preacher is based on the true story events of the real Sam Childers, who endorses the film. The movie is more drama than the trailer and cover art depict, and less action, but there is not enough action OR real-life documentary-style filming to make this as interesting as it could have been. Gerard Butler is passable in the role but looks nothing like the real Childers (not to mention his accent slipping through more than once) and the filmmakers could have dealt more with the more interesting side of Childers’ story which saw him pitting his Christian faith against acts of violence. If they had explored that side of the equation, then the movie could have been great….but as it stands, the movie is just sort of ho-hum with no real staying power. It doesn’t really distinguish itself from other generic action films and there are much better dramas out there to boot.

Still, I think it’s at least worth watching once, if only for your introduction to Sam Childers himself, so you can know a bit about his back story if you’re so inclined. Michelle Monaghan is nice to look at and it was cool to see Michael Shannon as well.

Humanity has been decimated by dragons; creatures thought to only have existed in myths and fairy tales. Quinn Abercromby (Christian Bale) and Creedy (Gerard Butler) lead a ragtag group of survivors living in an abandoned castle in the English countryside, trying to survive day by day. When a group of American warriors led by Denton Van Zan (Matthew McConaughey) shows up and claim to be able to slay the dragons once and for all, Quinn has to decide if they can do what they say they can do.

This is one of those movies I always seem to forget about, and I think a lot of other people do, too. I recently re-watched it because my girlfriend had never seen it so I figured what the heck.

The first half of the movie is really interesting and draws you in, but then it seems to lose focus in the later half. I appreciate the dark feel of the film and I think the idea behind the “Archangels” is really great, where specialized shock troops jump out of the helicopter to attack the dragons. (Life expectancy of an Archangel: 17 Seconds) And hooray for the Star Wars reference, as well!

Bale and McConaughey are actually really great in this, playing off one another and bringing their acting chops into this action film, which is always refreshing. Butler is good, too, as well as Izabella Scorupco as Alex Jensen – the pilot of the chopper – though they don’t really get as much screen time as Bale and McConaughey.

For a film that’s around ten years old, the special effects hold up surprisingly well. There are only a few instances where you can tell they were using a green screen, which, in the scheme of things isn’t too shabby. It could’ve been a lot worse! My only other gripe is that one of the characters, toward the end, dies in a really anti-climactic way. My jaw dropped open and I just sat there in disbelief in how lame it was.

This film is a fun option if you’ve been jonesing for a dragon movie, but it has its own particular take on the dragon species and there may be other films out there like How To Train Your Dragon that provides a better dragon experience, especially for the kiddos – because this is definitely not a kid’s flick. (But it is a completely different flavor of movie so I guess it’s like comparing apples to oranges.)

Movie Trailer For Reign Of Fire

An archaeological team has been working hard, digging up the past. When their leader, Professor Johnston (Billy Connolly), goes missing – his son Chris (Paul Walker) wants answers. After discovering a piece of parchment along with the professor’s glasses and a signature that is carbon-dated to the year 1357, the group is told by a secretive company that they have accidentally sent Professor Johnston back in time. Armed with their wits and protected by a group of combat experts, the archaeology team must survive in the past long enough to find the professor and make it back to the future…but they only have eight hours before they’ll be stuck in the past forever, and they’ve landed smack-dab in the middle of a war between England and France.

Timeline. When I first heard about the film, I had extremely high hopes. It was based on a Michael Crichton novel of the same name. The premise was cool, for sure, but the film just didn’t have enough momentum for me. For sci-fi fans, the sci-fi is sort of weak and not done well and for action fans, there wasn’t really enough cool action sequences included for a movie about medieval war. Even the love story part of it was brief and didn’t have much meat to it.

The characters are basically “faxed” into the past so as far as time travel movies go, it was also weak. The premise alone was not enough to carry the film. The biggest turn-off for me was the acting. These characters, all archaeology students, WENT BACK IN TIME and witnessed history first hand. What did they do? Walk around like it was nothing. The whole thing felt like an episode of Buffy the Vampire Slayer to me. (Meaning, there are all these crazy things going on, and in Buffy, the characters treated it like normal, everyday occurrences….same in this movie). Not only would TIME TRAVEL blow their minds, but getting to see things and how they were really done back then would give these people intellectual boners. Them not caring led to me not caring.

I think it’s worth watching at least once, but there are other, better movies dealing with time travel. I just wish that this one had been as cool as it could have been.