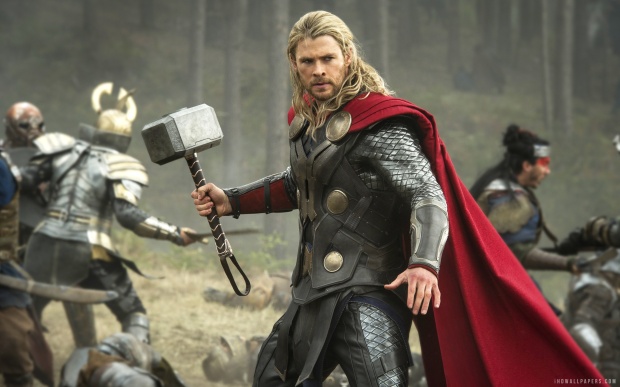 Faced with cleaning up Asgard after Loki’s (Tom Hiddleston) treachery in the first Thor film and in The Avengers, Thor (Chris Hemsworth) has a huge task ahead before he can be with Jane Foster (Natalie Portman) on Earth. Between Thor and his flame on Midgard (Earth) stands Malekith (Christopher Eccleston) and the remnants of the Dark Elves, who want to return the universe to darkness. With Odin (Anthony Hopkins) wanting to step down from the throne and his brother Loki imprisoned, Thor must find the strength to stop the Dark Elf threat and return order to Asgard once and for all.

The tricky thing about making a Thor film is to not make it like a Superman film. Unfortunately, while this wasn’t the worst film I’ve seen….it’s just not unique enough to truly set it apart from other superhero films in the genre and it’s definitely not different enough from Man of Steel to set it apart from DC Comics’ much more popular, titular character.

The comic book version of Thor really is interesting. He’s noble and follows a code of honor but can also be a real misogynistic asshole. I mean, he’s a viking. He’s a demigod. He’s a womanizing tough guy with a heart of gold, somehow. So what we have in the movie version is a lame, good-looking, soft, warrior-archetype Superman clone with a hammer and an accent.

While I love Natalie Portman, her character in this film (and in the first) is mostly superfluous and unnecessary. It’s a way to tie him to Midgard, but the chemistry and connection between Thor and Jane doesn’t really exist on-screen and so when Thor wants to return to Earth to be with her, it’s just not believable. They should have focused more on his relationship with Sif (who is much more interesting than Jane, and a much stronger woman character). Whatever time Sif and Thor share onscreen is more dramatic and poignant than time spent between Jane and Thor. (I also want to note that people think Jane’s character is a sexist trope, but Thor is a demigod. She’s meant to be smitten by him. Guys would be equally as smitten by Sif if she showed up, as long as she didn’t disembowel them.)

Thor: The Dark World had the promise of being a more rich and intensive film experience than the first film, but really….it sort of fell short. Loki was the one saving grace of the film, not only because Hiddleston is a fantastic actor but because Loki’s character is allowed to roam free in the realm of human morality. Thor has that ability, too. He’s not just a jock with a hammer. He’s not just an alien demigod with a penchant for eating mutton and bedding babes. He’s Thor. He’s badass. Too bad he really wasn’t in this film.

It’s worth seeing at least once to complete the Avengers tie-ins (and it IS Thor), and there’s kind of a weird/creepy/unexpected cameo bit after the credits with someone you wouldn’t expect to see in a Marvel film. It just should’ve been better.