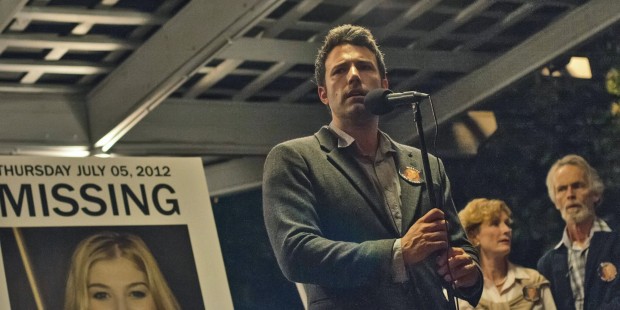 Author Nick Dunne (Ben Affleck) arrives home on the eve of his 5th wedding anniversary to find his wife Amy (Rosamund Pike) is missing under mysterious circumstances. After calling the police, Nick finds himself in the middle of an intense media circus as the search for Amy goes underway. Soon, the clues begin to pile up and fingers begin to point Nick’s way.

I went to see this film with a couple of friends last night as I’d been hearing good things about it. I’ve never read the novel it’s based on by Gillian Flynn (who also penned the screenplay) but according to online sources, the movie differs only slightly in some ways from the book version. Movies always differ from their book counterparts, though, so this shouldn’t really be a surprise to anyone.

It’s rare for me to want to watch a hyper-realistic crime movie – they aren’t my thing. Still, all the good things I heard about the various performances given by the actors made me want to check it out, so that’s what I did. Every single one of the actors in this movie, even Ben Affleck, really turned it up a notch. Affleck kept his cool just enough during the film to make me waffle on whether or not he had anything to do with Amy’s disappearance. Rosamund Pike, however, carried this movie with her role (in my opinion). She is not only accessible and sexy – but also terrifying. Another surprise was Neil Patrick Harris in his short role which added a lot of subtext to the film, regardless of how small a part his character played in the overall story.

The direction was great – Fincher hardly ever fails at that (except maybe with Mulholland Drive). The music was low-key enough to not interfere but still added just enough mood for a thriller. The length was a bit too long, however, clocking in at a whopping 149 minutes. The only real reason I’m giving this film four stars instead of five is the ending – which I felt was maybe a little rushed. I dunno if it was due to time, or due to something else – but the entire movie built up the characters to be solid and absolutely believable within the context of the story, except for the last half hour or so, which was unbelievable and completely took me out of the movie. I’d love to see a director’s cut in the future to see if maybe the motivations of the characters were a little more clear before some of the film hit the cutting room floor.

All in all this is one worth watching at least a couple times so you can catch all the little “easter eggs” (like the Scott Peterson novel one of the characters are reading at one point) and nuances in background scenes and in the subtleties of the characters and their actions. Good job again, Fincher – you do great work.

An office worker (Edward Norton) caught up in the doldrums of his job meets up with an eccentric soap maker (Brad Pitt) who challenges his views on everything he’s ever known. The two of them conceive and begin a new form of therapy called Fight Club, and the idea catches on, sparking a new underground club that nobody is supposed to talk about. When Marla Singer (Helena Bonham Carter) starts to come between the soap maker and the office jockey, things start to spiral out of control and in the end, the very fibers of reality are tested.

This is one of my favorite movies and it’s based on a book of the same name, written by Chuck Pahlaniuk. When I first saw this film, I had no idea who Chuck Pahlaniuk even was. (Lemme tell you, I soon went out and tried to read everything of his I could) However, I knew who David Fincher was and this movie was perfect for him to direct.

Edward Norton and Brad Pitt are amazing in this film. At the time, I wasn’t even a big Pitt fan, but this is one of his roles that definitely turned the tables on that. Actually, for that matter, the same goes for Helena Bonham Carter. She was perfect in this (unlike some of her other films, in my opinion).

The snappy narration and dialogue, the dark tone, the testosterone-fueled punching matches, the commentary. It’s all great. It’s a trip through someone’s brain, that’s for sure. Also, with a twist at the end that puts Shyamalan to shame, it was an awesome movie for its time and still holds up more than ten years later.