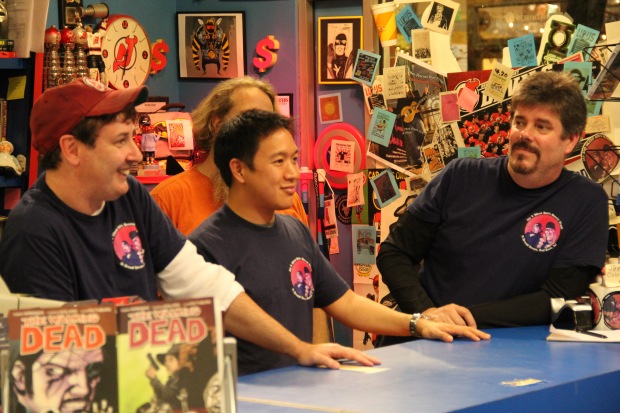 Jay and Silent Bob’s Secret Stash is a comic book store located in New Jersey where many familiar faces from Kevin Smith’s films (Clerks, Mallrats, Chasing Amy, etc.) are employed. Touted as being unscripted, Comic Book Men centers around the staff’s exploits as well as trying to capture the essence of fanboy culture in the comic book world.

Overall, the first season (and by extension, the show) was interesting. but even though it’s supposed to be unscripted, I can’t imagine that it’s NOT unscripted. Each episode fit neatly into a different theme and many customers came in with items seemingly relevant to the episodes as well. Other reality shows seem to be able to hide the scripted feeling a little better.

Getting to see all the neat back issues and rare toys and artwork is another great reason to watch Comic Book Men. The comic collector in me squeals with joy in seeing the issues that I own being haggled over on television. There is a happy nostalgia and fanboy appreciation that the show encourages and succeeds in fostering.

If you’re a fan of Kevin Smith and/or enjoy Pawn Stars type of programming, or are a fan of seeing comic books and/or toys and artwork, this is the show for you. I will give the second season a chance but I will probably only do so at this point in order to check out all the rare and weird finds.