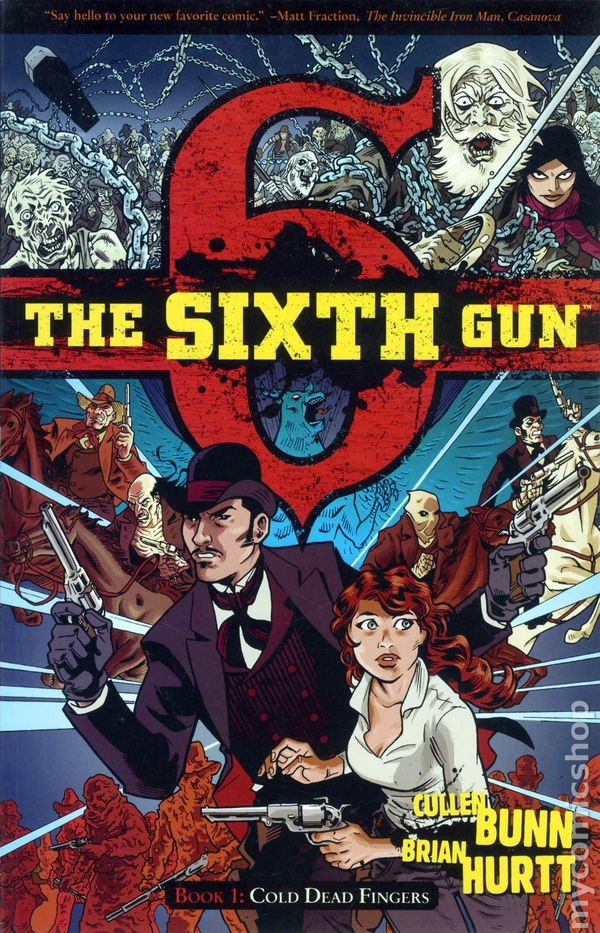 The Sixth Gun – Book One is a trade paperback which collects issues of the Oni Press comic book written by Cullen Bunn with art by Brian Hurtt.

Six guns with individual arcane powers were found during the American Civil War by General Oleander Hume and distributed among his most trusted (and wicked) associates. Over time, however, one of them – with the ability to grant its wielder visions of the future – disappeared. Then, in a time of need, the gun makes its way into the hands of a young girl – Rebecca Moncrief – who is later joined by a mysterious gunfighter and treasure hunter, Drake Sinclair. The two of them must unlock the secrets of the gun and its origins and figure out a way to lose their pursuers who are none other than a long-dead-but-returned-to-life General Oleander Hume and his posse.

If you know me at all, you know I love comic books and that I also love anything having to do with the American Civil War, so this book was a natural choice for me to check out. I had seen it once or twice and then one of the local comic book guys I know reminded me to try the first volume and I picked it up.

The artwork by Brian Hurtt is really nice and perfect (in my opinion) for the type of story The Sixth Gun is. The writing was pretty decent, too. The story moved along at a nice pace and I never really wanted to take a break. I flew through the first volume and it has a real cinematic feel to it. I’m betting this will be a mini-series or a movie in the future. I liked the characters, too. They never really felt forced and some of them were kind of complex (while others were throw-aways).

If you’re looking for straight-up Civil War action, this book doesn’t have a ton. The Civil War aspect is more just for “flavor” than anything else and provides a bit of context for the story and the world this book is set in. I’m sure if you like magic or fantasy or westerns or steampunk, then you’ll enjoy this.