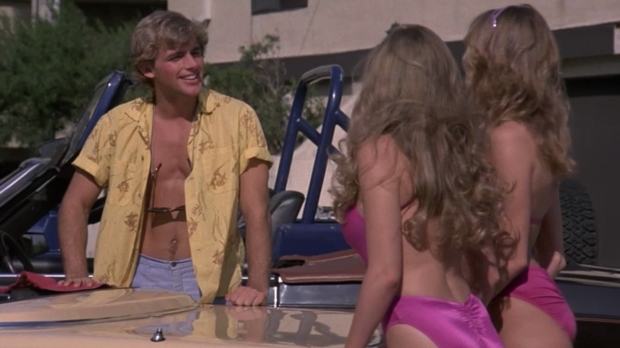 When three older men come to the beach to score chicks, they learn fast that just because they have the money doesn’t mean they’ll be able to charm the ladies any easier. Seeing an opportunity, young beach-bum Scotty (Grant Cramer) offers to give the three men lessons in how to “dialogue” with women. They agree and frivolous partying ensues in true 1980’s fashion.

Yes, I know what you’re thinking – and, yes…this is one of those films.

Yup, you guessed it.

There’s really nothing I can say that would justify this piece of 1980’s cinema, other than it may have been funny to someone, once. While watching, I wasn’t so much able to laugh as I was trying to figure out why it was labeled as a comedy. I guess if you can call three older dudes trying to score with a bevy of beautiful women funny, then this is it. Otherwise, it is basically the story of a ladies magnet trying to train a bunch of creepers to not be so creepy and rapey.

Most of the humor came from men being spurned in “hilarious” ways or from “ugly” jokes or from physical jokes. Aside from that, there were just a lot of boobs and man ass. (Obviously more boobs, though)