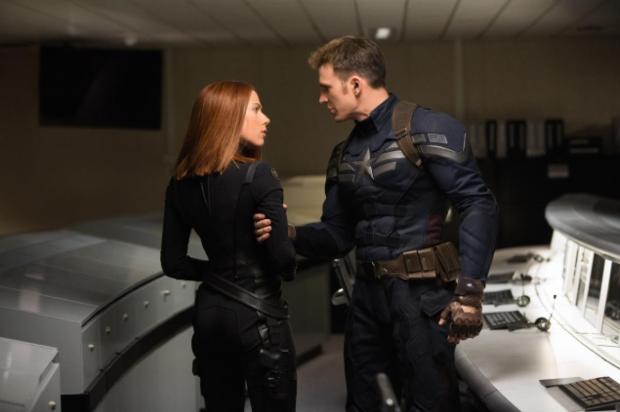 Steve Rogers (Chris Evans) struggles with the morality issues that accompany the new world he’s awakened to. He finds the United States Government takes a back seat to the power of S.H.I.E.L.D. and he wonders if he should continue the fight or step away from the underhanded dealings of his new employers. However, after Nick Fury (Samuel L. Jackson) is targeted by a mysterious assassin known only as The Winter Soldier (Sebastian Stan), Rogers must team up with Black Widow (Scarlett Johansson) and Falcon (Anthony Mackie) to get to the bottom of the new assassin’s identity and motives before it’s too late.

This film was an excellent sequel to the first film, Captain America: The First Avenger and a nice follow up to events in The Avengers.

Action, action, action – there was a ton of it here and since the film wasn’t primarily set in the 1940’s, we really get to see how Cap handles modern day threats….and he sure looks cool doing it.

Anthony Mackie gives an impressive performance as Sam Wilson/Falcon, and he pretty much stole the show as far as I’m concerned. I hope he shows up for Avengers 2! He’s that cool. Sebastian Stan also impressed with his portrayal of Winter Soldier, who provides a great antagonist to Cap and his team. Scarlett Johansson, of course, sizzled as Black Widow. She’s been doing a great job in that role. And on top of all that we get to see ROBERT REDFORD in a Marvel film? What? That’s so cool! One curious omission was Hawkeye. Where the heck was he in this film? As a member of S.H.I.E.L.D. I would’ve thought he’d be called in for all this governmental hullaballoo.

There was a lot of focus on Hydra in this film, so it was nice to re-touch on where they ended up in the modern world after the events in World War II.

This is a great film overall,  so go see it and make sure to stay for the extra scenes after the credits. There are a couple of teaser after-credits shorts, so make sure to stay for ’em all if you want to get all the tasty Cap morsels you can for your money. This film should tide everyone over until Guardians of the Galaxy comes out – I’m beyond excited for that movie to drop on us.

Cullen Bohannon (Anson Mount) is a former Confederate soldier in a country that’s healing after the American Civil War and the assassination of president Abraham Lincoln – and he’s searching for his wife’s killers, most of whom were Union soldiers during the war. Leaving a bunch of corpses in his wake, Cullen finds himself one of the individuals living in Hell On Wheels – the temporary, mobile town following the progress of the Transcontinental Railroad as it spreads west.

When I first saw the description of this show on Netflix, I thought it might be some sort of cheesy programming reserved for late nights at home. I was wrong on that count.

Hell On Wheels, at least the first season, was pretty enjoyable overall. The main character, Cullen, shrugs off traditional southern “Rebel” stereotypes and in a way flips it so that the Union has a few bad eggs in it, too. Cullen has his low points but overall seems to use his own code of honor.

One thing I have to say is that for a man searching for his wife’s killers, he seems to take a while to really get into the hunt. We have a few instances early on in the season where he really digs in but then it almost seems as if he forgets his mission while he’s moving on down the rails.

Since Deadwood hasn’t been on the air, I’ve been looking for similar programming and while this show isn’t as great as Deadwood, it has some of the same, dusty, late 1800’s flavoring that made Deadwood so cool. I’ll definitely be checking out the second season. Hell On Wheels, like many of its characters, is likable even if it has some flaws.

Retired colonel John Matrix (Arnold Schwarzenegger), lives with his daughter Jenny (Alyssa Milano) in the mountains. An exiled Latin-American dictator named Arius (Dan Hedaya) sends henchmen to find Matrix and force him to assassinate the president of his country, using Jenny as a hostage. Matrix becomes a one-man army as he fights to get his daughter back from the clutches of an evil madman.

No matter what I think of the actual film, this is one of those movies that’s just classic and re-watchable over and over again.

Despite some bad acting, sloppy politics and logic, and some cheesy one-liners and action scenes, this movie is a real guilty pleasure as far as Schwarzenegger movies are concerned.

There are better action movies from the time period, for sure. The one female character is annoying and almost all the bad guys have fake-looking mustaches and can’t hit the broad side of a barn with their bullet sprays, but it’s one of those films you can watch with your buddies and laugh at. (Also, it made me feel like a creepy perv seeing Alyssa Milano so young in this movie after seeing her in a film like Embrace of the Vampire which was made about a decade later)