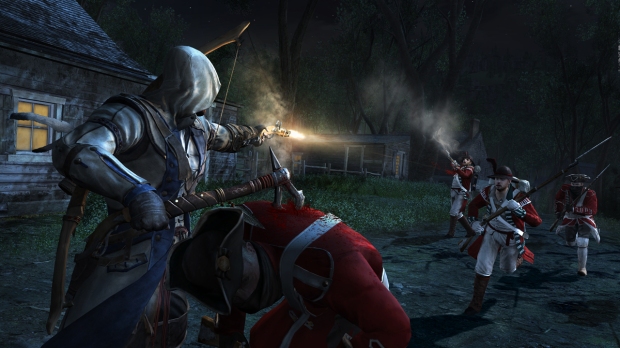 In Assassin’s Creed III, players assume the role of Connor Kenway, a Native American brought up in hard times and trained to be an assassin during the 1700’s. Throughout the game, you will experience historical battles such as the Battle of Breed’s (Bunker) Hill and the Battle of North Bridge where the shot heard ’round the world occurred in Concord, Mass. You will also experience other historical events such as the Boston Massacre, the Boston Tea Party and Paul Revere’s Midnight Ride.

You will be able to enjoy roaming historically and visually accurate (for the most part) portrayals of Boston, New York, Concord and Lexington. (Though, I couldn’t find The Old Manse while I was near the Old North Bridge, in the game).

Despite a lot of historical things, the game also, of course, is historical fiction and they take liberties (ha, no pun intended) with some of the events in order to facilitate their own sci-fi-themed storyline…which also takes place simultaneously in a near-future where you are a modern day assassin looking back via the Animus. (A device which makes this sort of “time travel” possible)

The game is immensely fun and I really enjoy traipsing over the rooftops of Boston, seeing as I know the area fairly well. The time period is also not done very much in games nowadays, and so it’s nice to see a playable, non-boring representation of combat from that era. (Can we maybe do one during Civil War times, PLEASE?!)

The multiplayer modes are super-fun as well, but a lot of the novelty is lost on many folks who just want to run around and avoid the challenge of trying to blend in with the crowd. This doesn’t happen in every game, but it happened in enough of the matches that it sort of made me move onto other multiplayer gaming options, though I still re-play the hell out of the story.

The best part of the game, in my opinion, are the naval battles you can take part in with your ship (once you complete the missions to get it). It’s really well-done and very fun.

There haven’t been a ton of glitches, (at least, I hear, compared to the Wii U version) but I did run into a cart that was half in the ground (vertically) so the driver was facing the sky, but with no horses.

If you liked the previous Assassin’s Creed games, you’ll like this too…and you’ll especially like it if you’re a history buff, or have been to Boston. It’s really fun to be able to walk around the Freedom Trail in-game.