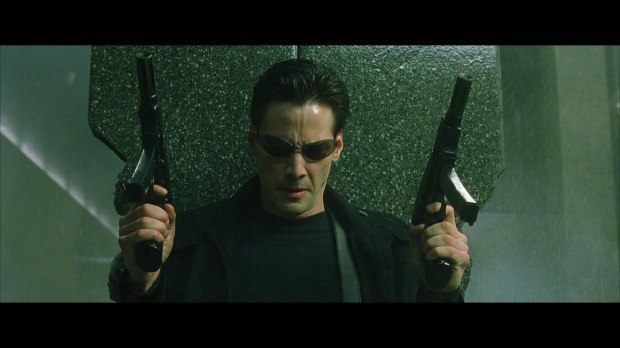 Neo (Keanu Reeves), a computer hacker, feels a bit out of place in the world. He’s constantly on the search for something he feels is missing in his life and finds it in the form of Trinity (Carrie-Ann Moss) who explains to him that not everything is what he thinks. She leads him to Morpheus (Laurence Fishburne), who tells Neo that he may just be the one who can save mankind from their evil machine overlords.

When I first saw this movie in theaters, I don’t remember having any special expectations of it. My uncle and I had just returned from a trip to Boston, where we tried out the Omnitheater; a massive screen that wraps around you and makes you feel like you’re actually there. Still jittery from that experience, we were uncomfortable in the normal theater as The Matrix started, re-living the discomfort we experienced just a day or two before in Boston.

When the movie started, though, and the beautiful images and great story unfolded on the screen, it was all forgotten. From the moment Trinity leaped into the air and froze before kicking the police officer in the chest, I was hooked and my jaw was dropped open in enjoyment and appreciation the entire time.

I hadn’t seen anything like it, up until that time. I don’t really like the sequels as much, but Matrix: Reloaded isn’t bad. (I really disliked Revolutions, but I will get to that in another review)

This movie changed the game in cinema-land and we are still seeing copycats and works inspired by the Matrix even in 2013.

The actors were all great (yeah, even Keanu). The soundtrack was amazing. The cinematography and special effects were astounding. The fight choreography from Yuen Woo Ping was great, and the script by the Wachowski Brothers was tight. The film was just one slick package all around, and I don’t think we’ll have another great spectacle like it for quite a while. (Watch, I bet there will be a re-boot soon).

Movie Trailer For The Matrix