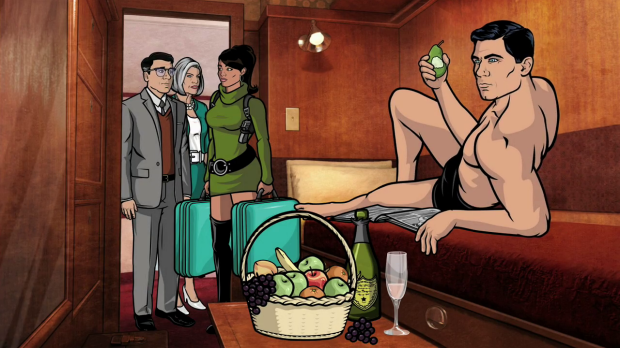 Archer follows several characters, mostly Sterling Archer (H. John Benjamin) – a great spy who is terrible at everything else. ISIS (not to be confused with the Islamic State in Iraq and Syria) is a spy agency he works at where everyone tries to indulge in their own greedy schemes or pleasures which often ends with disastrous, yet hilarious results.

Season 1 is an introduction to the characters and their world of espionage-gone-awry. We follow Archer and his somewhat-Oedipal interactions with his mother, Malory (Jessica Walters) and his fellow spy and ex-girlfriend Lana Kane (Aisha Tyler). Archer manages to piss off everyone he meets at some point with his extreme chauvinism and ego and I dare you not to laugh at the exchanges between the characters. Also, if you’re a fan of SNL – Chris Parnell voices the role of the cowardly Cyril Figgis.

The animation has a nice style that is reminiscent of other shows like Sealab 2021, which was also created by Adam Reed, and it seems to fit the espionage and retro-60’s feel the show gives off.

Each episode is pretty much stand alone aside from a couple, so you don’t necessarily have to watch them all in order as each one packs its own comedic punch. However, there are many in-jokes and nods to previous episodes as you move on, so as always – it’s best to watch with at least some semblance of continuity – especially in later seasons.

This is one of the funniest shows out there right now, hands down. You should check it out.

Trailer For Season One Of Archer

Harry Lockhart (Robert Downey Jr.) is a bumbling thief who ends up masquerading as an actor for an audition to escape police. Getting the part, he is to be trained by a police officer known as Gay Perry (Val Kilmer). Harry soon finds himself at the center of a murder mystery that puts not only his own life in danger but also that of his childhood sweetheart, Harmony Faith Lane (Michelle Monaghan).

This film, before Iron Man, was supposed to have been Robert Downey Jr.’s comeback role but for whatever reason, it didn’t do too well at the box office and only enjoyed a cult following after it was released on DVD.

With a lot of noir elements and a lot of charm, this movie is great during the first half but then gets super-bogged down toward the end and almost feels like two different movies, which is probably why it didn’t do too well initially.

Robert Downey Jr. is in fine form here, and you can see why he made such a comeback (eventually). Val Kilmer also turns in his best performance, in my opinion, since The Salton Sea.

Other than slight pacing problems at the end, this dark comedy is sure to engage you at least for a while, especially if you’re into Raymond Chandler.

Neo (Keanu Reeves), a computer hacker, feels a bit out of place in the world. He’s constantly on the search for something he feels is missing in his life and finds it in the form of Trinity (Carrie-Ann Moss) who explains to him that not everything is what he thinks. She leads him to Morpheus (Laurence Fishburne), who tells Neo that he may just be the one who can save mankind from their evil machine overlords.

When I first saw this movie in theaters, I don’t remember having any special expectations of it. My uncle and I had just returned from a trip to Boston, where we tried out the Omnitheater; a massive screen that wraps around you and makes you feel like you’re actually there. Still jittery from that experience, we were uncomfortable in the normal theater as The Matrix started, re-living the discomfort we experienced just a day or two before in Boston.

When the movie started, though, and the beautiful images and great story unfolded on the screen, it was all forgotten. From the moment Trinity leaped into the air and froze before kicking the police officer in the chest, I was hooked and my jaw was dropped open in enjoyment and appreciation the entire time.

I hadn’t seen anything like it, up until that time. I don’t really like the sequels as much, but Matrix: Reloaded isn’t bad. (I really disliked Revolutions, but I will get to that in another review)

This movie changed the game in cinema-land and we are still seeing copycats and works inspired by the Matrix even in 2013.

The actors were all great (yeah, even Keanu). The soundtrack was amazing. The cinematography and special effects were astounding. The fight choreography from Yuen Woo Ping was great, and the script by the Wachowski Brothers was tight. The film was just one slick package all around, and I don’t think we’ll have another great spectacle like it for quite a while. (Watch, I bet there will be a re-boot soon).

Movie Trailer For The Matrix 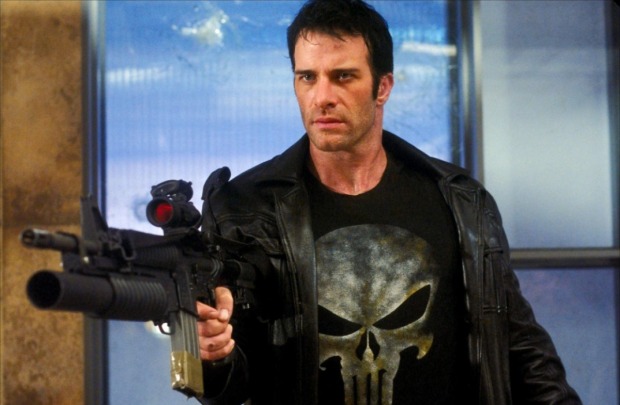 Frank Castle (Thomas Jane) is an FBI agent who foils a drug deal in which Howard Saint’s (John Travolta) son is killed. Saint is a crime lord of the highest caliber and sets out to punish everyone involved. He discovers that Castle and his family are getting together for a reunion and decides to kill them all. With his wife, son and entire family dead, Castle re-groups and goes on a vengeance-fueled murder rampage against the Saint family in an all out war as the Marvel Comics character, The Punisher.

I was never really sold on Thomas Jane as Frank Castle. I don’t fully know why, but I just wasn’t. I thought Dolph Lundgren looked the part back in The Punisher (1989) but that movie had about as much to do with the actual Punisher franchise as Mickey Mouse. Ray Stevenson, from Punisher: War Zone (2008) was a perfect casting for Castle, in my opinion, but that movie also suffered from severe story problems.

What I wish could have happened was that they took Ray and put him in this movie and then amped up the story and it could have been amazing. Really, it could have!

As it is, we get a glimpse of emotion when Frank’s wife and kid are running from the mobsters but then, after they kill Frank about 80 different ways (beating him senseless, shooting him point blank multiple times and then blowing him up) he is transformed to The Punisher but we don’t really transform with him. He is living in an apartment building with some wacky-yet-lovable neighbors (and also Rebecca Romijn Stamos, because she’s TOTALLY believable as the ‘girl next door’) who are constantly wondering about him.

My favorite parts about this movie were his fight with The Russian and the encounter with the singing assassin, Harry Heck, who sounds and looks a lot like Johnny Cash. Those guys were both taken from story runs that Garth Ennis did in the comic books, so I guess you could say I like the books more than the movie.

Jane’s Punisher is just never quite badass enough, which kind of ruined it for me. Travolta wasn’t too bad, but that’s the problem. We needed more time with Castle’s family so that we cared about them and THEN they should have killed them all off so we wanted to see them avenged. As it was, I just thought they all did incredibly idiotic things while they were being fired at by the mob.

In any case, it’s not the worst Punisher movie I’ve seen and certainly not one of the worst movies I’ve seen in general, but I felt kind of let down. I hope they re-boot this series someday, but I hope they stick with the emotional side of his loss because that’s what’s most effective in the comics and why he’s an enduring character. STORY FIRST, PEOPLE!

Movie Trailer For The Punisher