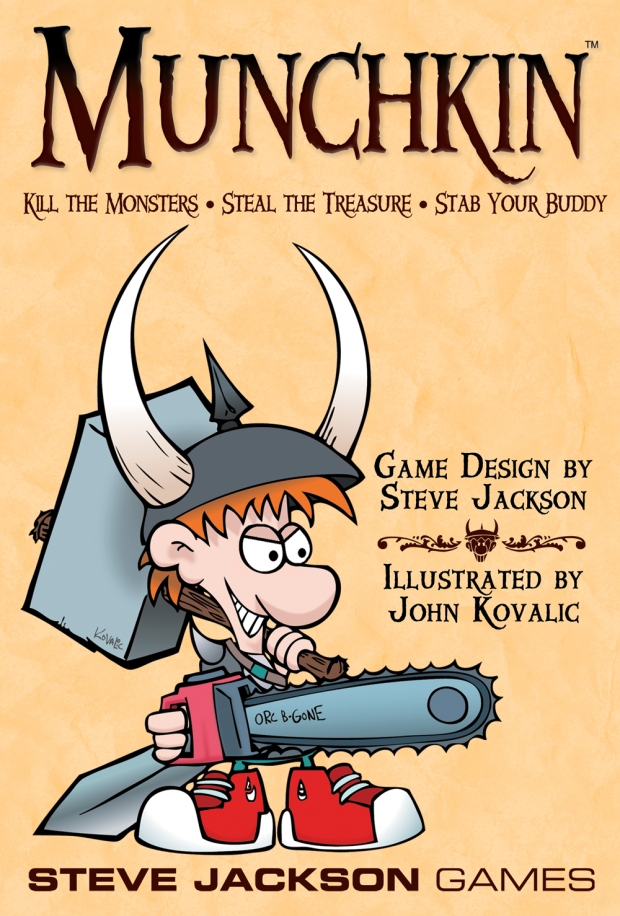 In the game of Munchkin, players create a character in the same vein as Dungeons & Dragons….but a bit more silly. Using cards drawn from a main deck, players will construct their characters using cards that grant Race, Class and Equipment and then delve through a dungeon – kicking open doors and fighting monsters to go up in level and to get treasure. The goal is to be the first player to reach level 10. Leveling up can be accomplished by defeating monsters, with random Level Up cards or by selling $1,000 worth of Gold Pieces. To achieve all this, players will undertake in some underhanded tactics like backstabbing, forging alliances and stealing from other players.

I was introduced to this Dedicated Deck-Building Game while at residency during my time with Stonecoast. I’d never played it before, and had sort of been out of the board game loop for a while, but I had a lot of fun with it. For best results, I strongly suggest playing the game with as many people as possible as it creates the most tension and the most unexpected alliances and a constant theme of change within the game, keeping it fresh and exciting. However, the game can be played with as few people as possible (and honestly, my girlfriend and I play it with just the two of us and it’s just as fun).

There are a TON of expansions to this game – including expansions featuring Conan The Barbarian (yes, and it is licensed), and smaller ones that feature characters from Penny Arcade, The Guild, Skullkickers and even Axe Cop. I haven’t delved much outside the fantasy realm with this game series, but there are also other themed sets such as Zombies, Superheroes, Space, Old West and others. You can combine all the cards you want to create the ultimate Munchkin experience, but I tend to only blend the fantasy ones together (though I’d love to combine the Space version and the Cowboy one for a Steampunk-themed deck).

This game is consistently fun, fairly cheap and there are just so many options to choose from that I can’t give it any less of a score. The possibilities are virtually endless. Give it a try, honestly.

Instructional Video On How To Play Munchkin