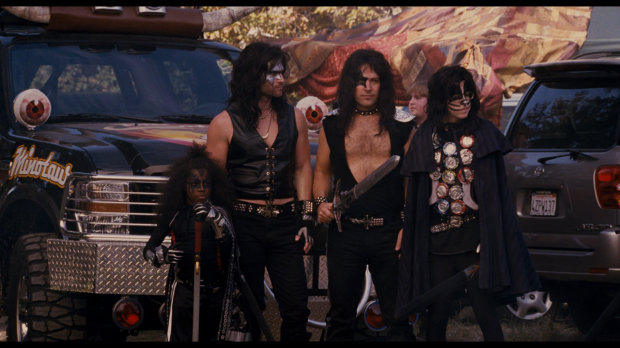 Wheeler (Seann William Scott) and Danny (Paul Rudd) are two energy drink salesmen who travel to various schools and businesses to try and sell their company’s drink. Danny is jaded and fed up with the company and is taking it out on everyone around him, including his girlfriend Beth (Elizabeth Banks). When Danny goes too far and ends up trashing his company’s truck, he and Wheeler must face either jail time or community service. Not opting for jail, the two salesmen end up as Big Brothers; Danny to a socially-crippled teen named Augie (Christopher Mintz-Plasse) who spends his days dreaming of being a medieval warrior. Wheeler, meanwhile, is assigned to a foul-mouthed boy named Ronnie (Bobb’e J. Thompson) and the both of them give the guys a run for their money, testing their patience, wallets and friendships.

I never quite know what to expect from a movie that has either Paul Rudd or Seann William Scott in it. Sometimes I think they get typecast as the same old characters they always play. This movie isn’t that different, but it certainly does some interesting things that a lot of their other films don’t do.

First, I did like the dynamic between Scott and Rudd. They’re just like a different version of the Ben Stiller/Owen Wilson duo, to me, and that formula works pretty well. Rudd was sarcastic and sometimes angry like Ben Stiller and Scott was sort of daft and out for himself, but full of heart like one of Owen Wilson’s characters. (Think Starsky and Hutch, or Zoolander).

The addition of the big brother program headed up by Jane Lynch’s character was great, as well as the LARP (Live Action Roleplaying) group that Christopher Mintz-Plasse enjoys so much. There were a couple of smarmy moments I didn’t enjoy, because I find that a lot of times in comedies like this they try to throw in some touchy-feely type things like Adam Sandler started doing with all his comedies after the 90’s and it sort of ruins the pacing.

Overall, I think it’s one of my favorite Paul Rudd movies. Plus, he helped write the script so it looks like working with Judd Apatow has paid off for him because this definitely seemed like it could be an Apatow movie. Give it a watch, even for all the cool cameos by other funny folks.