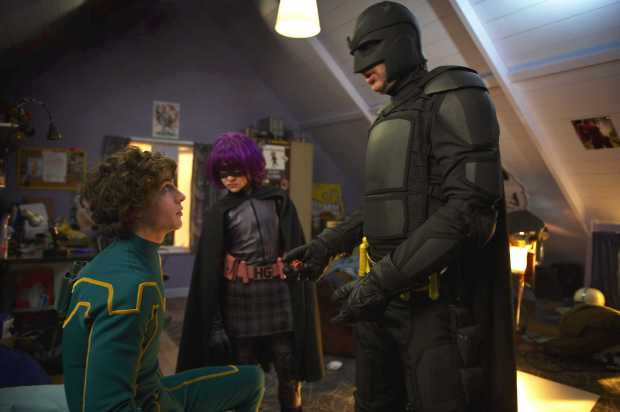 Dave Lizewski (Aaron Taylor-Johnson) is a high school kid with lots of problems; Girls, unpopularity and no real talents to call his own. One day, after being robbed by some street thugs, Dave decides he’s had enough and creates the superhero persona of Kick Ass. Despite not having any powers or training, he becomes involved in a web of crime and punishment, teaming up with other ACTUAL vigilante heroes like Big Daddy (Nicholas Cage) and his daughter, Hit Girl (Chloe Grace Moretz) to take down evil crime lord Frank D’Amico (Mark Strong) and his loyal son, Chris D’Amico/Red Mist (Christopher Mintz-Plasse).

Kick Ass is, of course, based on the Marvel/Icon comic written by Mark Millar and drawn by John Romita Jr. of the same name. The comic book differs a lot with major plot points but generally has the same feel, and both can be enjoyed as separate entities. I loved Kick Ass when it first came out, and I hadn’t read the comic before seeing the movie so I didn’t have trouble separating them from each other.

I have been getting a little bit of Nicholas Cage fatigue with all the films he’s been in lately, but this is one of his better roles. He totally nails Big Daddy, and it’s fun to see him on the screen as a cross between The Punisher and Batman. Chloe Grace-Moretz is one of the best characters in the movie as Hit Girl, and Aaron Taylor-Johnson and Christopher Mintz-Plasse both do a great job as nerdy guys trying to be heroes.

There is lots of action, very gratuitous violence and some great scenes. Kick Ass’ character is very reminiscent of Spider-Man’s early years, so it was fun seeing a “more” realistic take on a boy just buying a costume and putting it on to fight crime.

See this film, read the comic book. Enjoy both. The sequel is coming out soon.